Combined test programs with In-Circuit-Test (ICT) and Function-Test (FKT) can be created. The CompactTSVP Pack integrates its functions into the interface of Test Engineer and provides the modules in the Measurement Center.

The hardware drivers are adapted in the instrument library. The basis is the R&S eGTSL software. In Test Engineer System Architect the CompactTSVP modules can be added to the project configuration.

The Tecap Platform is open to programming techniques that are integrated by means of a Platform Engine, e.g. the supplied technology for .NET test programs and their development with Visual Studio / Sharp Develop.

The CompactTSVP Pack integrates with the tools and the in-circuit test technology as Platform Engine.

Thus the functions of GTSL/eGTSL are available in the Tecap platform:

With the assistance functions, the Physical Ini, the Application Ini and In-Circuit Test programs can be imported and exported.

The Physical Ini Import Wizard imports the machine description into the active system setup of the Tecap project. The Export Wizard creates the corresponding Physical Ini file from the configuration in Tecap.

The Application Ini Import Wizard imports an existing Application Ini. Before the wizard can perform the import, all instruments used in the Physical Ini must be configured and refer all configured benches to a test site in Tecap.

The channels entered in the Application Ini in the AppChannelTable are then included in the endpoint confguration in Tecap with the TS-PMB cards and assigned to a test site. At this point, changes to the channel assignment can be made. When the tester is started, an Application Ini is automatically generated from this data to be used with the eGTSL.

The Export Wizard exports the contents from the Tecap System Setup to an Application Ini.

In-Circuit test groups can be added to an existing test plan only by using this wizard.

For the selected ICT source file, the test group contents to be imported can be selected. In the case of name equations, the old status is overwritten by confirmation.

Due to the different structure of the test plan and ICT, the imports of the ICT tests are split into several tests in the test plan.

The Import Wizard allows to import existing variants in the In-Circuit Test into the test plan.

After selecting the ICT source file, the test groups and the In-Circuit Test variants are listed. The selected contents are imported into the test sequence (variant) selected in the Tecap test plan.

The In-Circuit Test Program Export Wizard saves the In-Circuit test groups and variants of the test plan to the selected target file.

CompactTSVP modules are added to the instrument configuration of the Tecap project either by importing the Physical Ini or by Auto-Detect. The CompactTSVP Pack integrates into Tecap Auto-Detect mechanism. Afterwards the address configuraton can be done via the user interface of Test Engineer if required.

These cTSVP modules are supported: 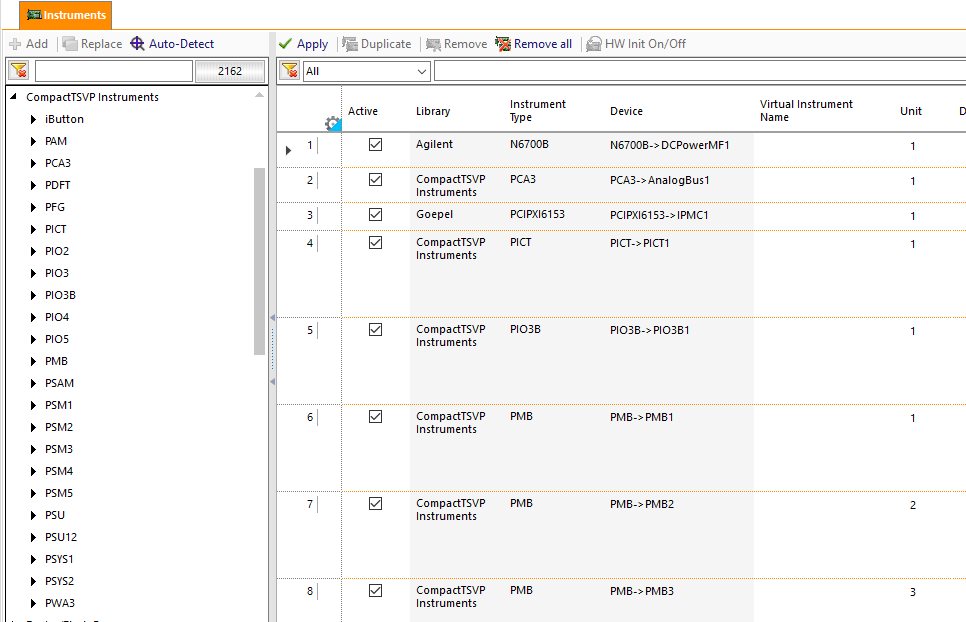 Each instrument has configuration options, like interface type and address. The options relate to the entries of the Physical Ini:

When importing the Physical Ini, these entries are generated automatically. If a device is added manually, most of the entries are automatically created with default values. Frame and slot must be configured though.

The CompactTSVP modules can be used without hardware in simulation mode on the Tecap Platform. This also applies to the ICT debugger.

Tecap natively supports booting in offline mode with initialization of the drivers in simulation mode, which is used accordingly in the CompactTSVP Pack.

A second option is to enable "Driver Option Simulate" in the device options. However, this then applies to all boot states, even in online mode. Therefore, the native method is recommended.

The instruction sets of the PSU, the PSAM, and the PAM have been extended by Smart Commands. These internally combine specific commands of the respective module and offer the user a simplified programming interface. They check the specified configuration before programming the module, thus preventing unconscious programming errors.

High-performance auto-routing is also used on the analog bus and modules such as PMB in all situations, thanks to intelligent branch caching.

This makes it possible, even in complex setups, to quickly route secure end-to-end connections. 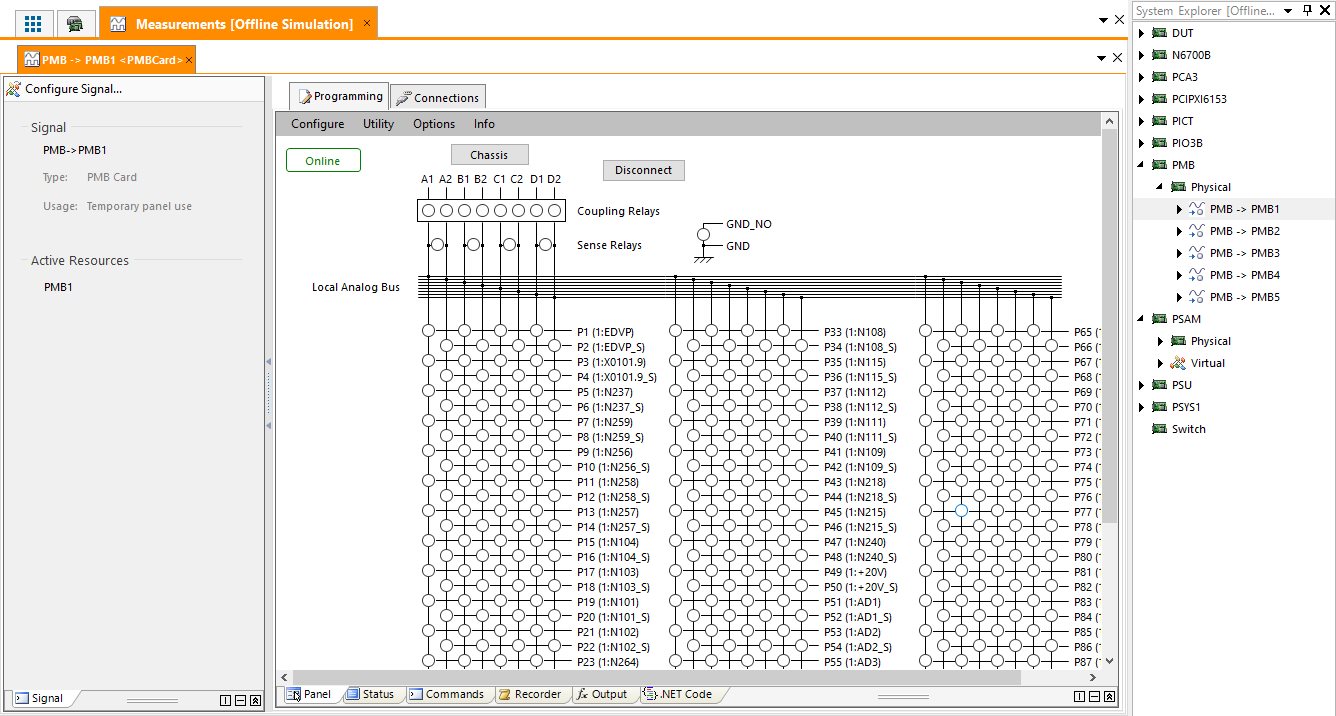 The Measurement Center of the Tecap Platform makes it possible to understand and learn the functionality of the cTSVP modules via the user interface provided by the add-on pack. The panels are like the Instrument Soft Panels from Rohde&Schwarz and offer a familiar look. When programming a module via its panel, the command blocks for the test program are generated automatically. These can be transferred into the program via copy/paste. While debugging the program, you can directly influence the measurement task via the individual commands and the panels and, for example, change the voltage or current of the power supply unit (PSU) during runtime.

The Analog Bus Panel gives you an overview of which cards are plugged into the system and how they are currently interconnected. 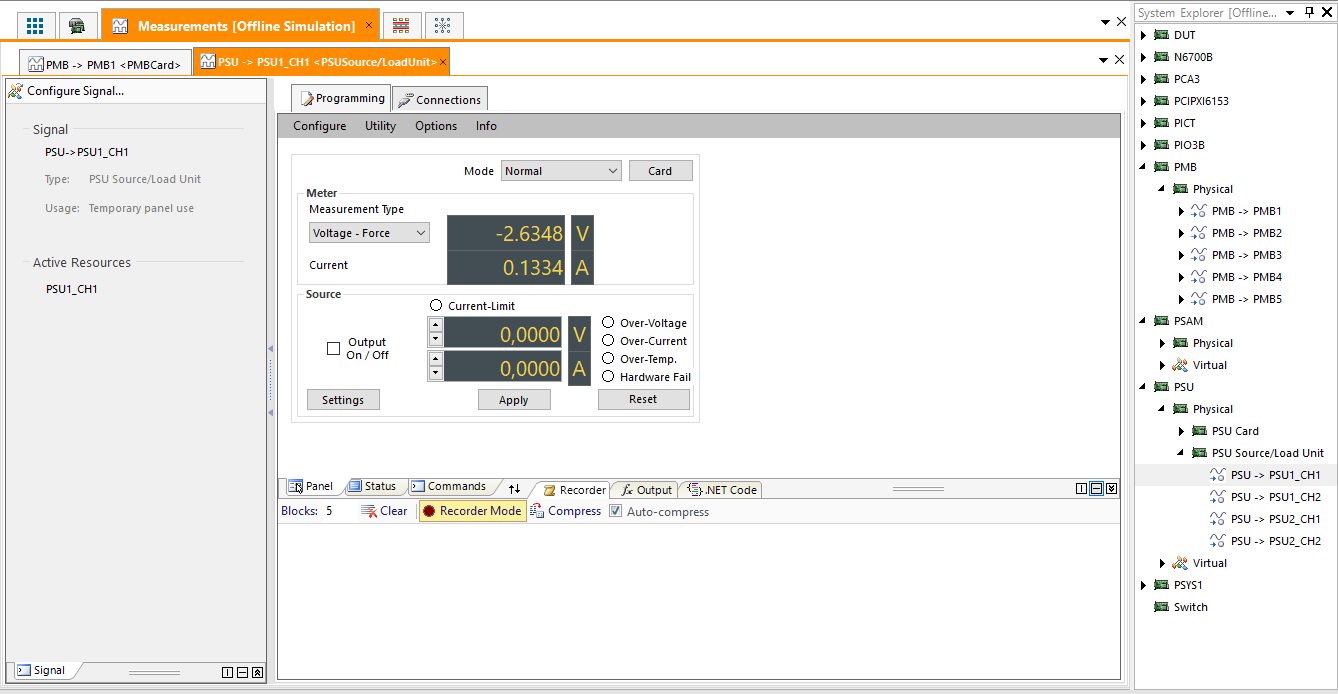 The ICT debug interface of eGTSL software from Rohde & Schwarz is seamlessly integrated into the Tecap platform via Platform Engine. The tests from the ICT program are initially imported by import into the Tecap test plan, which from now on is the information master. Starting from here, IC tests can be selected and debugged in the Test Engineer. If IC tests are selected for debugging, the debug console opens automatically after startup. In order for the ICT engine to be used in a project, it is activated in the Project Stage via the interface and added as a program engine. The ICT engine can be configured for debug operation and production. These options represent the course of the in-circuit testing program. Accordingly, either the eGTSL debugger is loaded at test start or the program runs without debugger in production mode.

The following settings can be made for debug mode in the in-circuit debugger:

The debugger allows you to add and delete checks and new folders. Changes made to the ICT program during debugging are automatically detected and synchronized after the run, if desired, in the test plan.

The Tecap CompactTSVP Pack is provided via installer, which integrates the components into the Tecap Platform.

The surfaces of the CompactTSVP Pack are available in English.

The add-on integrates into the Test Engineer interface, such as the main menu, the toolbar, and the Workbench Explorer of the project.

This site contains terms and trade names that are trademarks of Rohde & Schwarz Gmbh & Co KG.

You may continously receive our services with a Software Update and Support agreement (SUS).

Support for application projects can be arranged with us separately.

com or give us a call.
Automated Test with Passion.